calm, cool, unpeturbed by an aircraft.. its great to see!

The Ndoto mountains are incredibly steep mountains, and these Elephants chose to climb to the top!.. What an incredible sight…

….   15 years ago there was disaster looming on these beautiful remote mountains in northern Kenya because the elephants were not there.. They had been completely wiped out by poachers in the 70s and 80s, and with their departure, little did every one think, was going to be a recipe for complete decimation of the valuable forests because of fires.. We were on safari over the holiday season, and for the first time since I have been walking the mountains the elephants are really settled and doing THEIR PART IN NATURE..

Elephants on some of the highest ridges in the Ndoto mountains.. Thanks Alexi Peltier for the two photos. 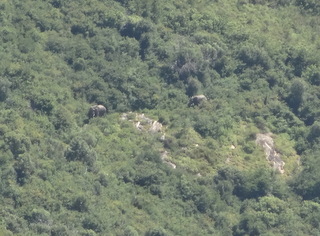 There was a big herd of Elephants down below us in the forest, but could we see them… mmmm just these two poked their heads out!

What happend was the bush on the flanks of this mountain became so incredibly thick due to the Elephants demise, so can you believe it, the people resorted to burning the bush, which spread like ‘wild fire’ up the steep sides and into the forests, and this was what was happening..

The fires would destroy every thing in their paths, including these beautiful ceders were destroyed

Complete and total destruction of acres and acres of Ceder Forest,

Theres only one animal that can deal with this thick bush and thats our elephant, they thrive and they clear it!! Heres a few paths we followed and could not stop saying thank you to the Elephants for coming back and SAVING THESE MOUNTAINS for every one!!

Its not so easy to see but here one of there routes they take,and we took 100 %advantage of there work!

This is an incredible pass with 1000 foot drop on both sides, and the elephants have to pull their stomachs in to get past some of these rocks!!

Thanks to you the Elephants.. Every single porter and visitor were singing their praises!

thick thick bush cleared and opened up by Elephants

paths through unbelievably thick bush now all through the mountains

This path that is actually down on the Milgis Lugga, has now become a major highway and we have caught hundreds of beautiful pictures of Animals making use of the big animals work.. Heres our friends just keeping it open!! 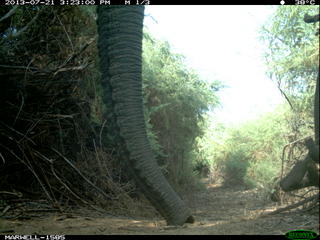 a trunk testing the ground! 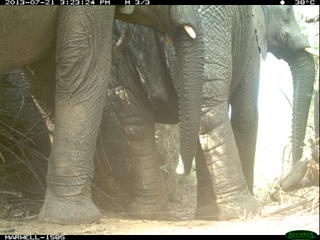 not sure of this contraption on ‘our’ route

All the rest of the residents using our Elephant path.. 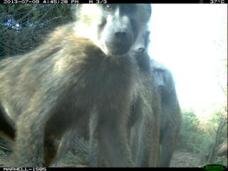 Well I never what have we here!!

first time we have ever seen an aardvark in the milgis !!! 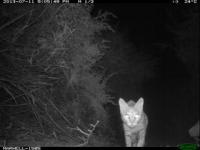 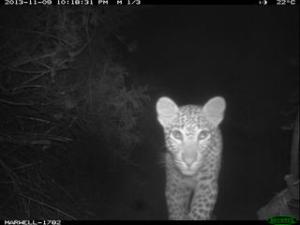 communications with this gorgeous boy, has given us a whole new outlook! .We have not seen him since 2012, and have been concerned but our friend, but  Lisa who came to help us communicate as per my blog in July, has been talking to him! He is the the biggest elephant that frequents our area, and really looks like from the shape of his tusks, that he could be a progeny of the great Ahmed of Marsabit!..

We are being pressured into allowing people to put collars on the elephants to follow there every step taken, I shiver at the idea myself!! SOOOO  we actually are hoping we can do it a different way with our a crystal ball!!

HOW MANY ELEPHANTS USED TO LIVE IN NORTHERN KENYA??? i would love to know.. 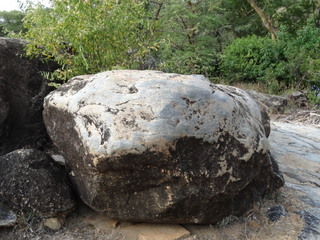 How many thousands of Elephants have rubbed their bums on this rock.. this is hard, hard rock!

these rocks are so so beautiful and moving to me.. I could hug them!!

there are about 10 huge rocks in this group that have been rubbed completely smooth.. This shows that this was SERIOUS elephant country in the old days.. What did we think we were doing…?? how/why did we let it happen.. ??

so the motto of this story is we must NOT medley with nature its dangerous and we will wipe our selves out by doing so..  the situation was so dire in the Ndotos, with every one just lighting fires willy nilly .. Water was drying up and People were crying!!

8 thoughts on “A simple message to Elephants… ‘THANK YOU””