Here with the Milgis collective report for the last year, compiled by Digby.. April 2018-May 2019 Please click on the above!

Now for the latest unbelievable scenes we have been seeing up north!!!

Sometimes these northern tribes call rain ‘Ngai’, the same word that they use for ‘God’ .. RAIN IS GOD HERE!!.. Talk about stress.. this year its been proper stress… the rain came over 2 months late and not every where, but at least in some places like towards the west and the Kirisias, and North to Baragoi it has been fairly good.. BUT towards the Kaisut and Chalbi deserts in the East and North of the Ndotos hardly a drop..

SO What have we…

MASSIVE movement of Rendille and Samburu pastoralists and their precious animals heading towards where it rained.. It is an unbelievably incredible sight,and amazing tenacity .. hard tough people.. they will NOT leave an animal dieing.. they stay with it, till it definitely can’t cope any more!.. We saw tear jerking scenes of animals doing their best, to put one foot in front of another to get to greener pasture, some had obviously collapsed and we came across donkeys carrying calves, old goats and sheep, and plenty of new borns..

We had been hearing all about the massive ‘invasion’ of pastoralists from the East to West, and out on our last safari in the Ndotos, we came across people really in a tough state of affaires, but still positive that they will find something to eat! I was happy as where we had come from, it was a little bit green!..

BUT on our way back driving from the north end of the Ndoto mountains, we came across this rather sad scene of a camel that just said no more.. a young boy taping her on her rump.. ‘not too much further and there will be food!’.. too difficult to photograph people with so much hardship!..  I keep on thinking of her, whether she made it!! BUT then we came across the main herd not too far ahead!

young lad pushing the last of the camels up the hill from Kileswa.. happy to see rain ahead of them.. 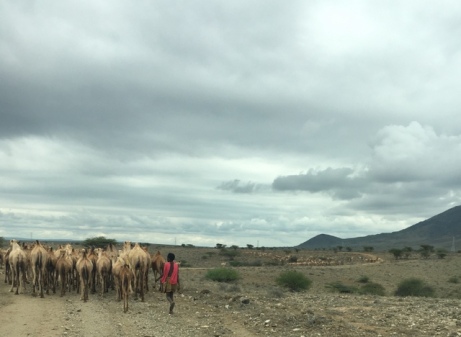 He was not going to budge off the road so we followed him slowly untill we got on to the Lbarta plains, and then we saw the magnitude of people and animals.. desperate for grazing

right across the plains.. hundreds thousands of them..

At the same time the wildlife follows!!

Its an incredible feeling of fairness and generosity between these tribes here.. the people that have had rain look on with good thoughts although they can see these hungry animals will gooble all their valuable new shoots up.. BUT they understand completely.. Next time it might rain in the East!!  So they help where they can, and direct the exhausted people to the places that have rain, and try and be helpful… it is a pleasure to be in the middle of it all!..

It has been humbling to watch this whole scene evolve!!.. SO WHATS GOING ON HERE??!

Our rains are usually due end of March, early April..  often the full moon or the new moon bring it.. But two full, and two new moons later … FINALLY!!!

Full moon setting over the Parsaloi, not a cloud in the sky!.. beginning April 19 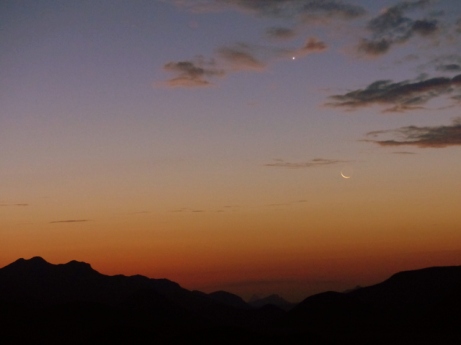 The last of the moon in the early morning sky..Early June.. Surely this will bring rain! A beautiful dawn like this! RED SKY IN THE MORNING SHEPARDS WARNING??? !! don’t they say!?? 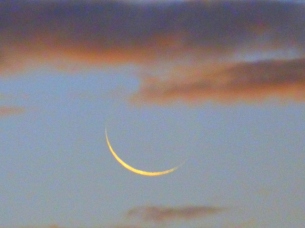 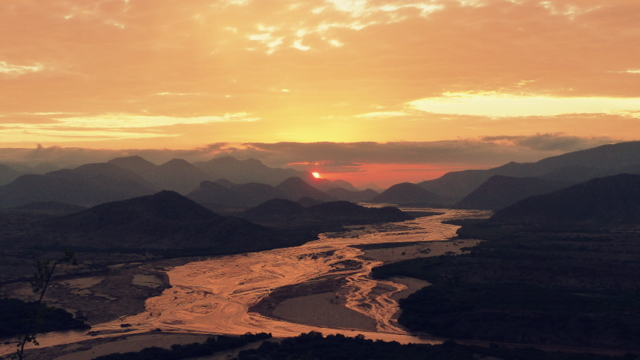 and the sun rise that day!!.. incredible light!

suddenly this happened!.. RAIN! We’d almost forgotten what it was!

And thank fully this is what it brought!!!

that storm coming in! 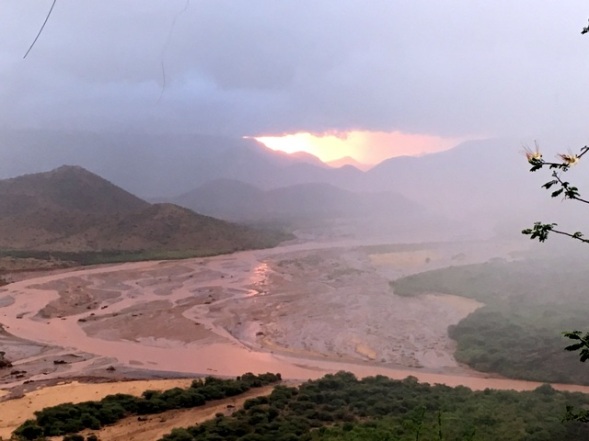 rain with the sunrise.. most unusual!

and down came the luggas in flood!! And what an exciting sight it was!!

The Laana Nikan (seiya) Lugga coming in full dangerous flood.. We saw a couple of guys sauntering across the lugga just in front of the flood!! Suddenly their paced quickened to a frantic run!!

The flood hitting the junction of the two huge luggas, where it becomes the Milgis !

A few days later we started seeing some movements!!  This was the start.. These guys with their 3 donkeys loaded to the hilt arrived to find the Milgis had abit too much water for the heavily laden donkeys so had to unload their house etc off the donkeys and take them across, then return to carry the rest!!

Two donkeys laden to the hilt with all the family belongings, including their house, with a youngster come to cross the lugga.. 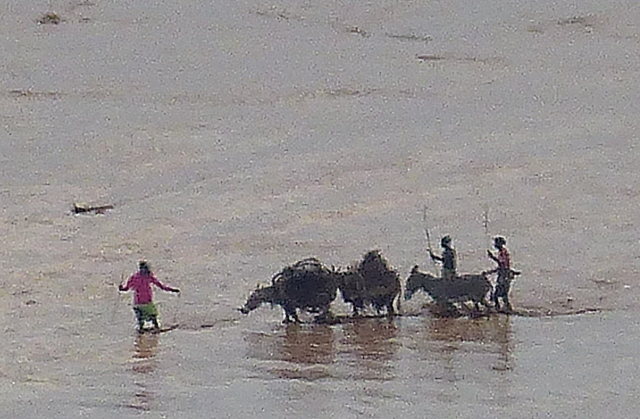 five trips across.. poor donkeys!.. What a load!

Five trips backwards and forwards and they were off.. We have to remember these guys are from the desert where they don’t see water very often..

But a few minutes later this lot arrive…It was about 30 people with probably a thousand goats , 100 camels, and ten donkeys!!.. it took them 5 exhausting hours to cross!

the camels and the first herd of goats crossed ok..

The camels seem to cross pretty easily!! the Rendille train the herd to always follow the dominant male..

The Rendille people are brilliant with their camels.. There’s nobody who knows a camel better, so the dominant male was told to cross and where he goes the herd follows.. So no problem for the camels!

The ten donkeys crossed with very little fuss.. they are so well behaved as well!

BUT the goats and sheep had other plans.. It was chaos..

then the goats said ‘no’

It was just this crazy battle for the already exhausted people, trying to tell the goats ‘I promise you the grass is greener over there”

But oh no they just would not go!! complete stale mate and time to think again! 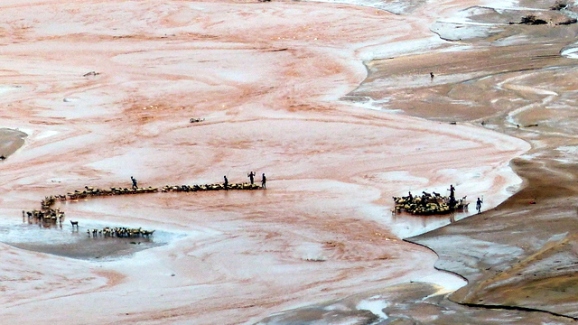 and finally the are across!.. more exhausted and goats unhappy.. There are tiny young ones all huddling and calling out!

And to make it worse some of the goats went and drank, we think, too salty water and suddenly 14 mothers of tiny young ones were laying dead..

their temporary ‘bomas’ while they recovered

In the mean time every single day, WAVE AFTER WAVE of thin weak, thirsty  animals coming from the parched desert in the east!..

Difficult to take pictures of people in trouble so obviously there are no close ups!..

wave after wave of cows, goat, sheep and camels, followed by their owners.. Fathers, and mothers, and children..

note the little black lamb.. Hes lost one mother hes not letting the other out of sight! 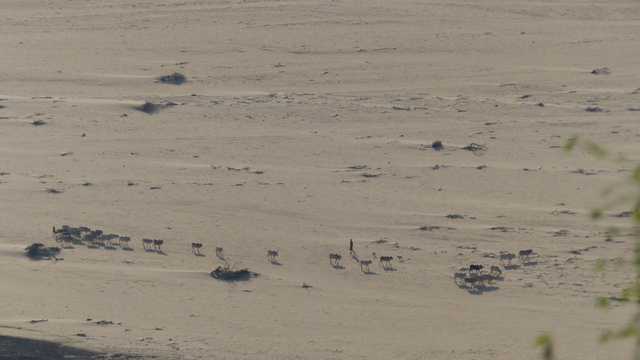 tHe same lot! the lambs ‘mother’ going back to push the cows to go faster.. the little black lamb right on his heels!

Donkey’s laden to the hilt, on the move..

and another boma.. packing up in the morning to move on

Followed by the wildlife… There has been no friction at all.. Every one with their heads down heading west!!

I didnt quite get the goat and Eleys together but they were close!

The eleys and the goats on the same mountain!

unpeturbed by the hundreds thousands of people and livestock!.. The elephants just going about their day! 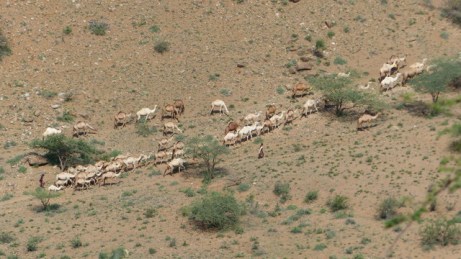 camels going one way around the hill……

the eleys a few minutes later going the other way round the hill! same path!

taking a quiet relaxing drink while theres movement all round!

And this is where they are heading.. I took a short flight over to the west to see for myself and to satisfy my mind … I’m happy to say theres been nice rain and every one will survive!

Up the Parsaloi Lugga, through this lovely gorge, in the bottom there is 3 small herds of cows..

The hills to the right are the Siampu hills.. they tell me theres plenty for all in here and across the Elbarta plains to Baragoi.. 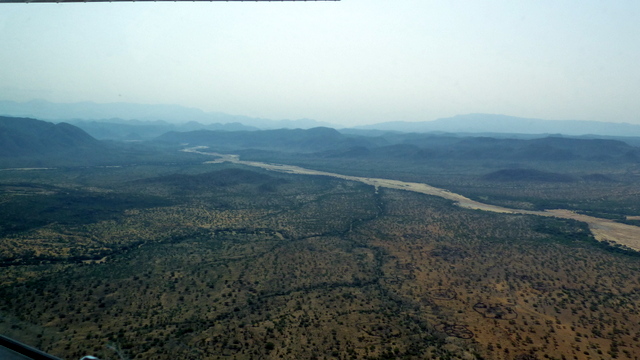 And a final look back to where they have come from .. some of these people have walked 300/400 kms more even in some cases, in search of food to save their precious animals..

In the mean time below Lkanto our resident Elephants just watch the movement all around them and quietly get on with living!

with the rains, comes water in the luggas.. No more digging wells for the Elephants.. They do their own digging, and spend hours enjoying their lovely filtered fresh water from their holes! 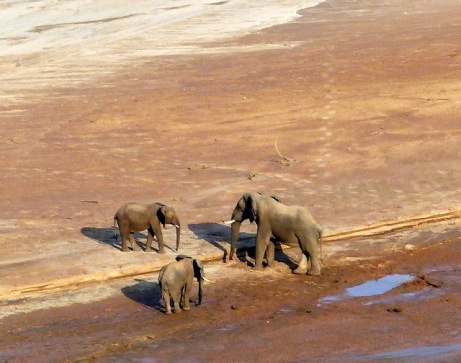 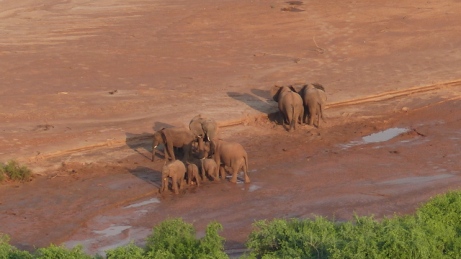 LUXURY for the elephants!! Finally the big boy leaves and they all enjoy the same water hole that he started!